The Josephine Hotel - A Look At The Old Guest Registers

I could hardly contain myself. After asking the current owner of the Josephine Hotel in Union Springs, Alabama, if I could have a look at the ominous thick stack of old hotel register sheets. I nearly fainted when Joyce said I could take them home and study them if I like. To me, this was like winning the lottery.

As I wrote a post here on my blog in 2014, this partially  damaged pile of Guest Hotel Registers was found in an old wood chest in a closet that is located under one of the back staircases leading from the 3rd floor down to the second. They had been there since at least the 1970's but only found in the 2000's when The Perrins bought the building. Most of the pages are in pretty good shape. The pages were not in their binder that they would normally be found in like the example below.

Below: This is an example of how the Hotel Register pages would be in a binder with the date shown on front. This example is not of The Josephine Hotel. 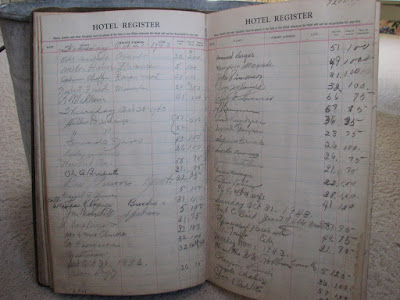 Clearly this is a very good example.  But for whatever reason, the previous owners pulled all the pages from the book, leaving us to guess from what years these precious pages of the past would be.

Here's the stack I actually brought home to study: 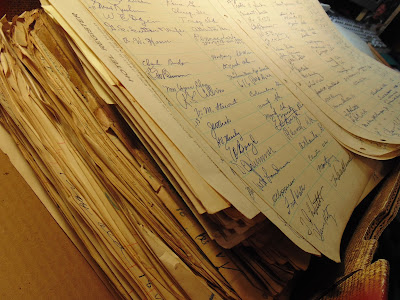 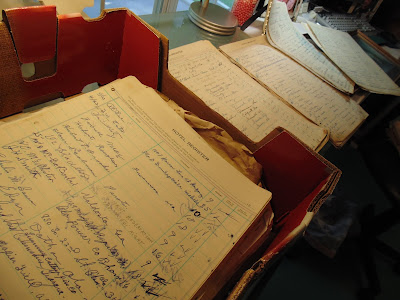 Well, I knew I had my work cut out for me. But heck, I thought it would be fun. Joyce had always planned to sit down and go through them thoroughly and see what all was in there. But by always being busy and on the go, she just didn't have the time.  So, since I am always blogging about the building why not see for myself.

My first objective was to try and determine a date since they weren't in the binder with the date on the outside. At first I thought I would have a hard time with that, but it turned out that the first clue was in the upper right hand corner where the form has a 19--,
the dash is to be filled in. About half of these sheets are like this. Then there were occasional dates written in on the pages where the guests signed in. It was ultimately determined that many of the 19 dash pages were from the mid to late 40's. Another clue was the constant blobs of ink dripped, splattered, and spilled on.  That's because in those days they used a pen and ink well. See below what I mean by that.

Below: In many hotels up to the mid 1950's you would find these at the clerks desk. This is the most common pen and ink well. 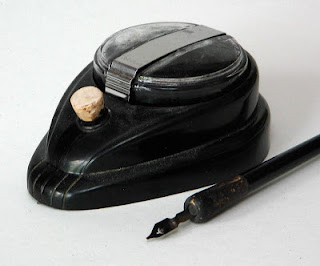 Sometimes higher end hotels would have something like this example: 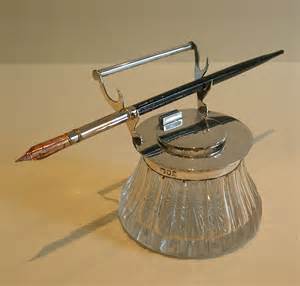 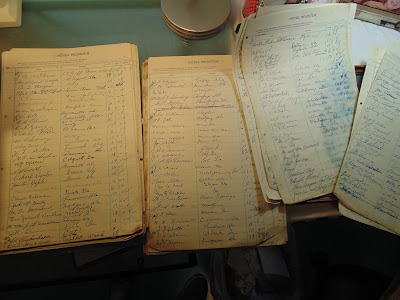 There were hundred of sheets and I actually looked at every single page, front and back, line by line, and name by name. It took every bit of 22 hours to comb through the hundreds of musky smelling pages. 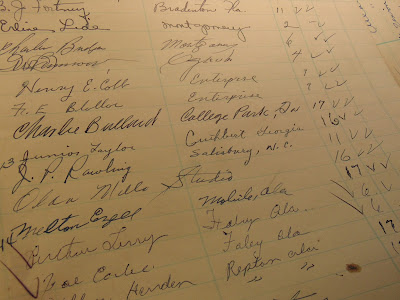 Below: Another indicator I used to determine the age of these registers was the private baths. Somewhere around 1903- 1905 the building underwent a renovation. Prior to the renovation there was one or two bathrooms on each floor to be shared by everyone on that floor. But more bathrooms were added and some would be private and some were shared.  It was like one bathroom that had two doors.  This was good for families with children. Parents would have a bathroom that connected to the next room for their children or other family. 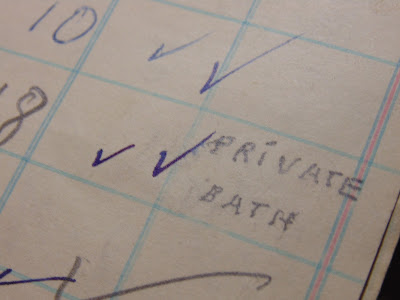 The results of my study of these Hotel Registers have rendered multiple surprises and I can honestly say it was worth all the time I put in to my search. There are were so many interesting surprises that I will have to break up my future blog posts in order to keep from making them so long.

I would have loved for these pages to have gone all the way back to the earliest days. Having those from the 1880's and 1890's when the hotel was actually in it's prime. The hotel was so beautiful in those days.  The décor, furnishings, amenities, and the restaurant in the building were first class. The hotel was called The Commercial Hotel at the time of the 40's, 50's, and 60's hotel registers I studied.
Much to my amazement the hotel stayed quite busy. Having a hotel right in the middle of town was so convenient to travelers who were in town on business.  I couldn't believe how many people came to Union Springs on business. Let me give you a few examples:

Mr. and Mrs. G.D. Anderson of Dayton, Ohio signed the hotel register sometime in the early 1950's.  They were a husband and wife team who represented a high-end clothing line called, Rolands Originals.  I looked it up. This company made women's suites and jackets. So I am thinking that this couple would have been making a sales call to one of the shops or boutiques in Union Springs at the time. Or perhaps a visit to one of our residents whom they may call upon to show their latest line. I found some example of Rolands Originals here below are just a few. 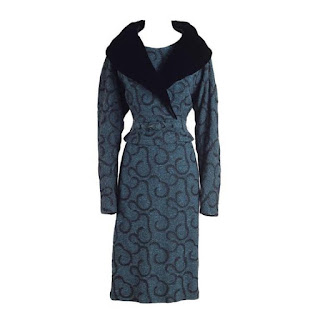 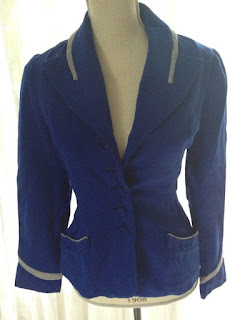 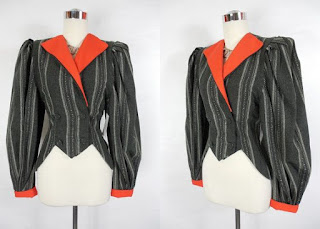 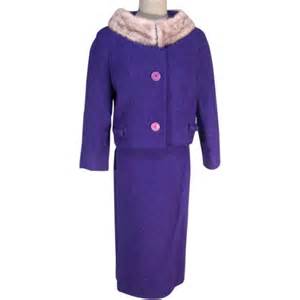 Pretty cool, huh? Well, there were other representatives who came from all over to do business right here in Union Springs. There was a man named, W. S. Bethell, who traveled here from Birmingham, Alabama. He was a writer for a magazine called "Progressive Farmer".  I noticed he came here quite a bit. Bullock County was known for it's cotton farming, as well as other types of agricultural farming. He was probably here to write stories or interview farmers, or talk with the kids of the local 4H Club.

Below are a couple of examples of the magazine from the same era as the hotel register sheets: 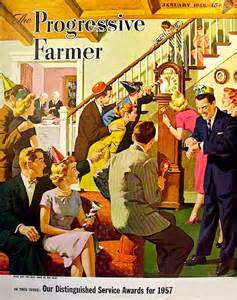 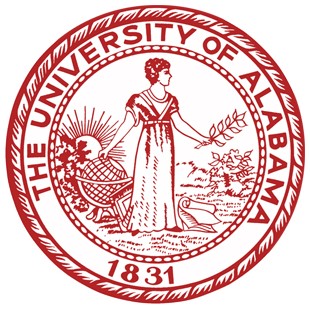 During my study of the guest register sheets I also noticed on a regular basis a check in from the Orkin Pest Control man. Yes, on a Monthly basis it was quite normal for the Orkin man to check into the local hotel and service all his customers on his route over the course of a two or three days.  I found an old Orkin statement mixed in with the guest registers where he also serviced the hotel too.  $10.00 to service a three story building? Wow, what a deal! 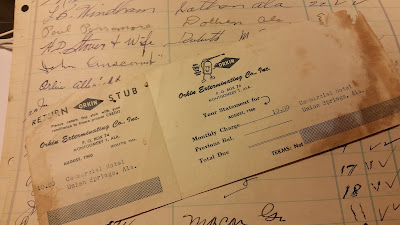 Another interesting couple of guys here on business. T.J. Bain and Charles Mayo checking in and here as representatives of Hallmark Productions. Oh, this I had to research. It turns out that beginning in the mid 1940's Hallmark was beginning to expand its brand. This is when you would see more prevalent card displays and this was the time when they came up with their signature slogan, "When you care enough to send the very best." That slogan carried them into the next phase of branding and brand recognition during the 1950's. Hallmark approached NBC in 1951 about sponsoring and original night time opera, "Amahl and the nighttime visitors".  It was a huge success and the name Hallmark has been a household name ever since. To date, the Hallmark company has won 81 Emmy Awards, thanks in part to it's humble start in 1951 and to it's own cable channel today. These two men were most likely into town to service accounts at the local drug stores. 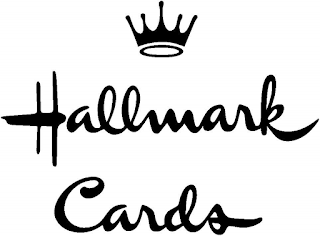 One thing I noticed over and over were men who checked into the hotel on a very regular basis. At first I was like, "What in the world does C of GA/ RR, mean?" I mean if anyone brought business to this hotel, it was these guys.  Well, I figured that out pretty fast. C of Ga/RR means Central Of Georgia Railroad. Aaahhh, I see. Well that makes sense. The train came right through here. I believe this was a stopover point for rest for the crew who would switch out here in Union Springs. That makes sense. This was great for the hotel. They always had a steady flow of crew checking in for rest. The hotel was so near to everything they could need. Restaurants, laundry, drug stores, or whatever they wanted to do for fun. 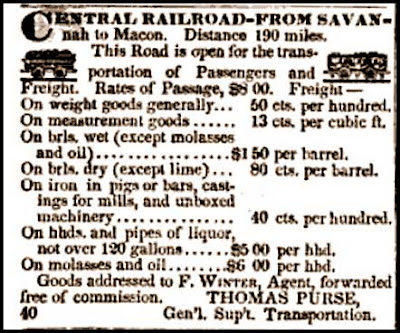 These examples I've given of the many company representatives who came to the town of Union Springs were just a snippet of the many, many who came here in hopes of making sales, expanding their product lines, or just making sure their customers where happy. Whatever the reason none can top these two guys whom I found in the midst of regular hotel guests. Nothing could have prepared me for the bona fide belly laugh I got from Hobo Ben and Ben's Buddy. Yes, from what I could make of what might have happened is this... One guy who drives for a company called Manifest Freight and the other drives for Red Ball Express. So, they are truck drivers, who may know each other or have just met, I don't know. But these two go into the hotel sign in and between the two of them can't pay the rate of the room. Both are determined to find a place to sleep and looks like they struck a deal with the hotel clerk for a place to lay their weary heads. Hobo Ben gets the lobby couch and Ben's Buddy gets to sleep on the floor in the lobby. Well, that's one way to get a good nights sleep. But let's not underestimate the compassion the hotel clerk had shown the two sleepy truck drivers. Here's to Hobo Ben and Ben's Buddy who ignite the eternal flame for kindness and compassion right here in Union Springs... or something like that. 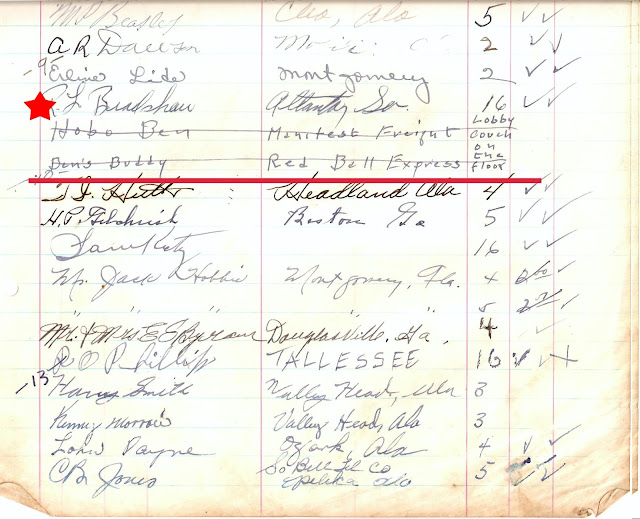 In conclusion of this post, a reminder, that this was just the beginning of my blog posts about these incredible hotel guest registers.  The upcoming posts are going to be worth watching for and worth the read. So stay tuned.

Posted by Unknown at 11:06 AM
Email ThisBlogThis!Share to TwitterShare to FacebookShare to Pinterest

Love a "Glimpse" back in time!