Puttin' On A "Silas Green Show"

Here's a great piece of history you don't hear much about. I just thought it was so interesting that I decided to devote an entire blog post to this topic.  As I was flipping the pages of the old Hotel Guest Registers from back in the 50's, once again, a name caught my eye and stopped me in my tacks. I saw the writing on the sheet, "Silas Green Show." "Hmm", I thought to myself. "There has to something to this."

The Silas Green From New Orleans was an African American owned company and ran a variety of tent shows, which in various forms toured the southern states between 1904 - 1957. 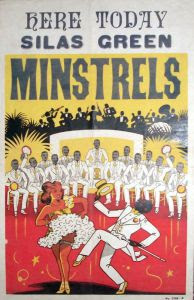 Below: See the Hotel Registration Sheets. The Hotel was called the Commercial Hotel at the time of this sign in. I found where they came here two times. 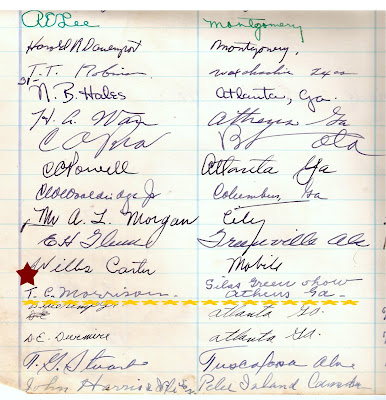 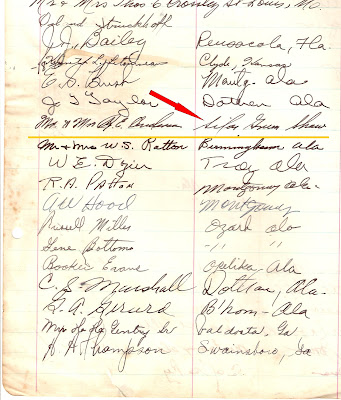 Here's a little history about the Silas Green Show. Eph Williams, (1885 - 1935) was the only black circus owner in America.  He has set up his first circus in Wisconsin in 1885 and by the mid- 1890's owned 100 Arabian Horses and employed 26 people. His circus business collapsed around 1902 but soon afterwards he acquired the rights to Silas Green From New Orleans.

He set up a new company, "Prof. Eph Williams Famous Troubadours," to tour the tent show. It played one-night stands throughout the South, and became one of the longest-lasting tent shows in America.  Williams managed the show and continued to perform house tricks, alongside musicians such as Bessie Smith. buy 1928, the troupe comprised of 54 people including a 16 piece band and 16 girl dancers. The main show tent had a capacity of 1400 people. 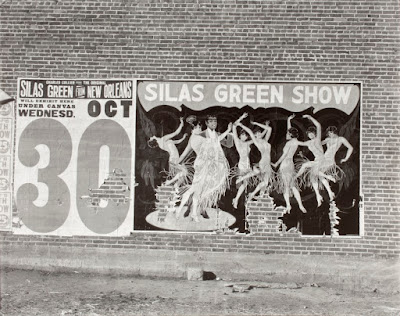 Around 1922, Williams sold half the share in the show to Charles Collier, who took over sole ownership after Williams' death in the mid-1930's.  The show continued to tour until the late 1950's, and in later years was sometimes billed simply as the Silas Green Show. 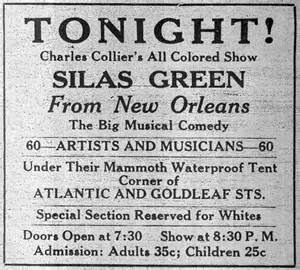 At the time of our hotel guests it was the mid-1950's.  The folks that checked in here I believe were the front people. They would have been in charge of arranging a place for the tent to be set up. Arranging printing of tickets, printing of signage, posters, and advertising for the upcoming events. These shows were very well done, professional, and highly entertaining to both black and whites in the South.

Below: Even though the show sometimes was know to be slightly racy, it was billed as a "clean" family show. 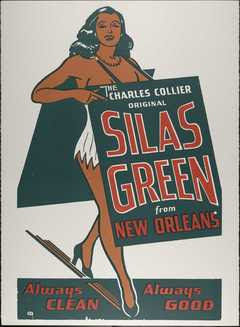 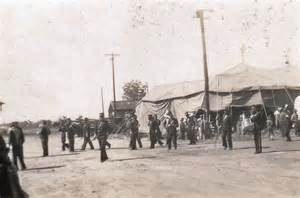 Below: Advertising of the Silas Green Show. Note just below that, "Always a good clean show." They did their best to create a show that was professional, fun, and entertaining for the whole family. 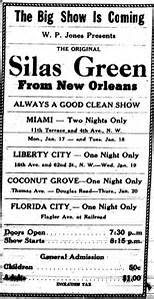 Part revue, part musical comedy, part minstrel show, the show told the adventures of short, "coal-black" Silas Green and tall, "tannish Lilas Bean. In 1940, Time Magazine said of the show:-
"This year their troubles start when they go to a hospital with suitcases labeled M.D. (Mule Drivers), are mistaken for two medicos, end in jail. The show is garnished with such slapstick as putting a patient to sleep by letting him smell and old show, such gags as "Your head sets on one end of your spine and you set on the other." Silas gets broad at times, but never really dirty.  What keeps it moving are its dances and specialty acts, its gold-toothed but good-looking chorus."

I would love to know if anyone in Union Springs remembers going to one of these shows. It had to be very entertaining.

It is without a doubt interesting to know that Union Springs had shows like this come to town. If anyone remembers this show please let me know.

That will conclude this post. Be sure to check back soon. I will be posting another great and entertaining group who came to Union Springs and stayed at the old Josephine Hotel, which was at the time, The Commercial Hotel.  So stay tuned.


Posted by Unknown at 6:35 PM
Email ThisBlogThis!Share to TwitterShare to FacebookShare to Pinterest

I saw the show in Liberty City(Miami) It was a spectacle. The whole community looked forward to this show. It was entertaining and people laughed and had a good time. The coming Civil Rights movement in the late 50's and the higher consciousness of people of color put the show out of business.

I saw it several times as a youngster in Mulberry Florida . The early show started a little after 8pm, but the no kids allowed show started after 10pm. Talk about the prettiest Black women that I had ever seen in my young life, they were on that stage. Peg legged Bates was the best male dancer but those dancing fine Black women are engraved in my memory until eternity. I am 76 years old, presently.